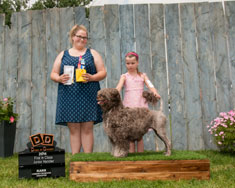 It has been a very exciting and busy summer! Aimee, the youngest dog enthusiast in the family made her debut in Junior handling in July at the Kars dog shows just outside of Ottawa. She handled Tia and had a wonderful time and did really well. Also showing that weekend was Captain and our baby Bella also made her debut in the show ring owner handled! Bella showed brilliantly and we both had fun. Captain won Best Of Breed on the Saturday and Sunday earning two more points towards his Grand Championship. Thank you Linda Thompson for handling Captain so beautifully.

The first weekend in August Captain showed for 4 days at the Alberta Kennel Club shows held at beautiful Spruce Meadows back in Calgary. Captain was expertly handled by Tammy Sawatzky and won Best of Breed three of the four days and is now only two points away from his CKC Grand Championship title.

Immediately after, both Captain and Tia headed down to the United States with Juliet Clendenon. Tia needed 5 more points to finish her AKC Championship and Captain needed 7 more points to finish his Grand Championship. On August 21st at the Manhattan Kansas Kennel Club shows Tia won Winners Bitch (WB) and Best Opposite Sex (BOS) for a 3 point major and Captain won Best of Breed (BOB)
for a 5 point major. Then on August 22nd Tia won Best of Winners (BOW) and Captain was select dog for one more point each. On August 24th at the Topeka Kennel Club shows Captain won select dog again for his final point and achieved his AKC Grand Championship. On August 30th at the Cheyenne Kennel Club shows in Wyoming Tia won WB and BOS for another 3 point major to finish her AKC Championship. Captain also won select dog for another 3 point major but his points were just extra. Juliet did an amazing job caring for, grooming and handling Tia and Captain and I am eternally grateful to her for her dedication and hard work. We couldn’t have done it without her!